Probing Islam: A Debate between Ali Sina vs. Javed A.Ghamidi and Khalid Zaheer 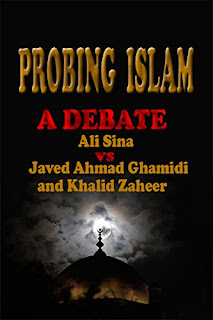 During the recent years, Islam has become the target of severe criticism and vilification, not just by members of other religions but also by a growing number of ex-Muslims. The Internet has allowed these critics to come out and speak their minds at an alarming rate. Such criticisms have had devastating effects on the minds of the Muslim youths, who are unable to answer the critics on their own and are bewildered that the Islamic scholars also have not come forth with satisfactory answers.

In the interest of unraveling the truth about Islam and clearing the minds of the young Muslims, I am formally inviting the Islamic critic Ali Sina and the modern Pakistani ‘state appointed’ Islamic Scholar Javed Ahmed Ghamidi to engage in a debate on Islam.

Ali Sina is probably one of the most eminent critics of Islam. He renounced Islam after reading the Quran and has managed to create a movement against Islam and has grouped together a large number of ex-Muslims who share his views on Islam. He has challenged Islamic scholars to disprove his climes the fallacies that he has identified in the Quran and hadith.

Javed Ahmad Ghamidi is a prominent Islamic Scholar who has been recently appointed by the Pakistani Government to help facilitate the government in forming a ‘modern’ interpretation of Islam and to do ijtihad for the development of a cosmopolitan modern Islamic Society. Javed Ghamidi has been under the tutelage of Amin Ehsan Islahi and idealizes the writings of his teacher with utmost reverence. Initially expelled from Jamaat-e-Islami due to some difference with the party’s founder Maududi, Ghamidi has managed to develop a following of his own. He has been actively involved in the government’s initiative to revamp and restructure Islamic ordinances in Pakistan like Hudood Ordinance and Zina Ordinance. He is also the president of the Al-Mawrid Institute based in Lahore. Javed Ghamidi also enjoys a good company of his students who teach in various places in Pakistan. Most notable are Moiz Amjad, Asif Iftikhar, Khalid Zaheer and others. Mr. Ghamidi operates through a network of Danish Saras (Houses of Learning) across Pakistan and has some major Islamic Sites to his credit. He also publishes various magazines in Urdu and English, such as Ishraq and Renaissance.